On July 8th, 2010 the European Business Awards sponsored by HSBC (www.businessawardseurope.com) announced that GroGlass SIA is to represent Latvia in the prestigious 2010 Awards programme. GroGlass SIA beat off stiff competition to be selected as one of 10 Country Representatives and will now compete for a coveted Ruban d’Honneur in the next round of the competition. Final category Award winners will be unveiled in Paris on 16th November.

Now in its fourth successful year, the European Business Awards has identified some of Europe’s brightest businesses based on their ability to demonstrate the three core principles at the heart of the Awards programme. The esteemed panel of judges were looking for organisations to represent Latvia who exhibited innovation, business excellence and sustainability.

Speaking about this announcement, Alexander Sasha Kelberg, CEO of GroGlass SIA said: “It is a great honour to be selected to represent Latvia. We see many challenges ahead of our company, but it feels wonderful to be recognized for the hard work that our team has been doing for the past several years. Since starting operations nearly 2 years ago, we have made great progress producing anti-reflective glass coatings for art-framing, architecture, displays, solar panels and greenhouses and it’s an honour to be recognised as one of the leading organisations in our country and in our field. We hope that our drive for innovation will result in a successful high technology business that Latvia could be proud of.”

The European Business Awards is dedicated to raising the visibility and progress of companies who excel in delivering innovation twinned with successful commercial results whilst acting responsibly and positively affecting the social environment they operate in. In 2009, the 99 Ruban d’Honneur recipients had a combined turnover greater than €570 billion and recorded an average annual profit growth of 56%.

Adrian Tripp, CEO of the European Business Awards says, “Over the past 4 years we’ve received an incredibly high standard of entries from organisations who are passionate about their business. However, very few get the chance to fly the flag for their country and compete across Europe to be recognised as one of the EU’s leading companies. It really is an exceptional accolade to be picked as a Country Representative, and together with HSBC we’re looking forward to seeing Latvia in the next round.”

Alan Keir, HSBC Group General Manager and Global Co-Head Commercial Banking, comments, “As we start to turn the corner from what has been an unprecedented chapter for businesses, we believe it is essential that we both acknowledge and celebrate the ingenuity that has enabled many companies to survive and often thrive across Europe during this time.

You are very welcome to attend our booth #1115 at WCAF in Las Vegas this year, where our Artglass™  products line will be presented. More information about trade show you may find here www.wcafshow.com. 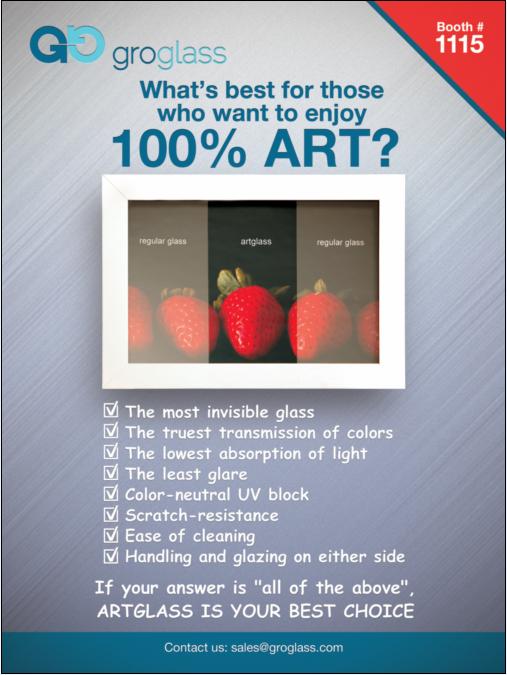 On April 7th, 2010 for the first time in Latvia in the store window a unique window has been installed – a premier wine store “Vintage” in Riga was the first to be glazed with Diamond by Groglass® anti reflective glass.

Diamond by GroGlass® with an anti-reflective coating installed in double glazed unit, compared to the usual DGU window, reflects 15 times less light, which makes double glass barely noticeable, easy to see through, and eliminates the appearance of mirror-like effects.

At the time when for business it is particularly important to increase customer traffic and turnover, the developer has decided to install the glass with anti-reflective coating, in order to provide much better through view and make the products displayed in the shop much more visible and attractive.

On March 3rd, 2010 USA ambassador Judith G. Garber visited GroGlass® facilities. The aim of the visit was to learn more about companies which are supported with investment from USA. Ambassador was delighted to find out that Groglass® is a very innovative company which has already impressed many customers around the world with the premium anti-reflective glass coatings.

GroGlass® provides a great example of the kind of export-oriented, high-technology industry that every country hopes to attract. I am proud to see American entrepreneurs advancing this kind of business in Latvia.

Participation in Glasstec 2010 was supported by Investment and Development agency of Latvia.

Participation in WCAF was supported by Investment and Development agency of Latvia.

For the second consecutive year, GroGlass® supports young people who are studying at the Latvian Institute for Solid State Physics (part of the University of Latvia). By starting this scholarship, GroGlass® hopes to motivate bright young minds to study physics, since we see an investment in the future of our country’s education as fulfilling our role of a socially responsible enterprise.The award ceremony took place on November 12, 2009 and this year a scholarship was awarded to Edgars Nitišs, a Master’s degree student, a very impressive young man with a good background in physics. His Master’s thesis focuses on electro optics.The scholarship was presented in cooperation with the University of Latvia Foundation, which was founded in 2004 with an aim to establish relationships with sponsors and patrons of the University of Latvian, to provide scholarships and other kinds of support to students, lecturers and researchers.For more information about University of Latvia please visit: www.lu.lv/eng/ 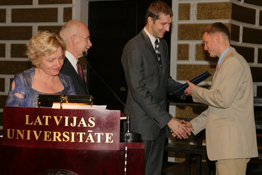 On October 22nd 2009 annual ceremony of Swedish Business Awards took place in Riga, Latvia. GroGlass®’ technology, providing the best anti-reflective glass in the industry, impressed the jury, which awarded GroGlass® the nomination “Innovator of the Year”.  The award was presented to GroGlass®’ Managing Director Alexander Kelberg by Swedish Ambassador Mr. Mats Staffansson. Established several years ago, The Swedish Business Awards have become a tradition in the Baltic States. The following nominations are honored annually: “Fastest growing Swedish company in Latvia”, “Corporate Social Responsibility” and “Innovator of the Year”.

The award ceremony was combined with the conference on current economic trends and strategies with participation from several distinguished speakers, including representatives from Swedbank, University of Cambridge and CSR Europe.For more information about Swedish Business Awards visit: www.swedishbusinessawards.com/