From September 26th to 29th in Bordeaux, port city of south-west France, the eXtended European Ultimate Championship Finals 2013 (XEUCF) brought together 16 strongest teams from all over Europe including Latvia. Salaspils Frisbee Club team “Salaspils FK” well represented Latvia and positively surprised its fan club coming home with honorable 4th place, valuable experience and great memories.For the participants tournament began, fighting not only with the opposing teams, but also with a very sultry weather conditions and temperature up to +32 degrees. Later on during semi-finals heavy rainfall, thunder and lightning were going to transform Frisbee games to mud wrestling. However, despite unusual weather conditions “Salaspils FK” made it to finals what is so far the best result in the history of the club.The game for bronze medals began on early morning and finalized with a score of 12:15 in favor of UFO Ultrecht from Netherlands.This time Salaspils FK failed to fully exercise their advantages – speed, skills and a keen desire to win.In spite of the few points that sunder the team from Bronze medals, Salaspils FK is pleased with the work and came back with a new and great experience to start the indoor season. In addition, the success of the team in eXtended European Ultimate Championship Finals 2013 did not go unnoticed. Team expects to visit Italy next summer and participate in World Ultimate Club Championships 2014. GroGlass® is glad to support young and talented athletes and even more proud and glad for their excellent results. Team received support also form Salaspils regional Council, Latvian Frisbee Federation, Aqua-Brambis Ltd. and Fittero Ltd. 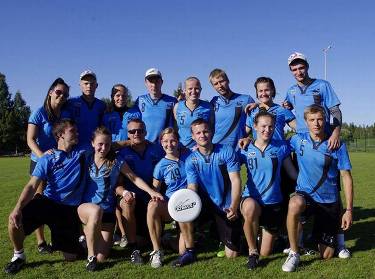